Fighting illegal deforestation and its drivers in Brazil 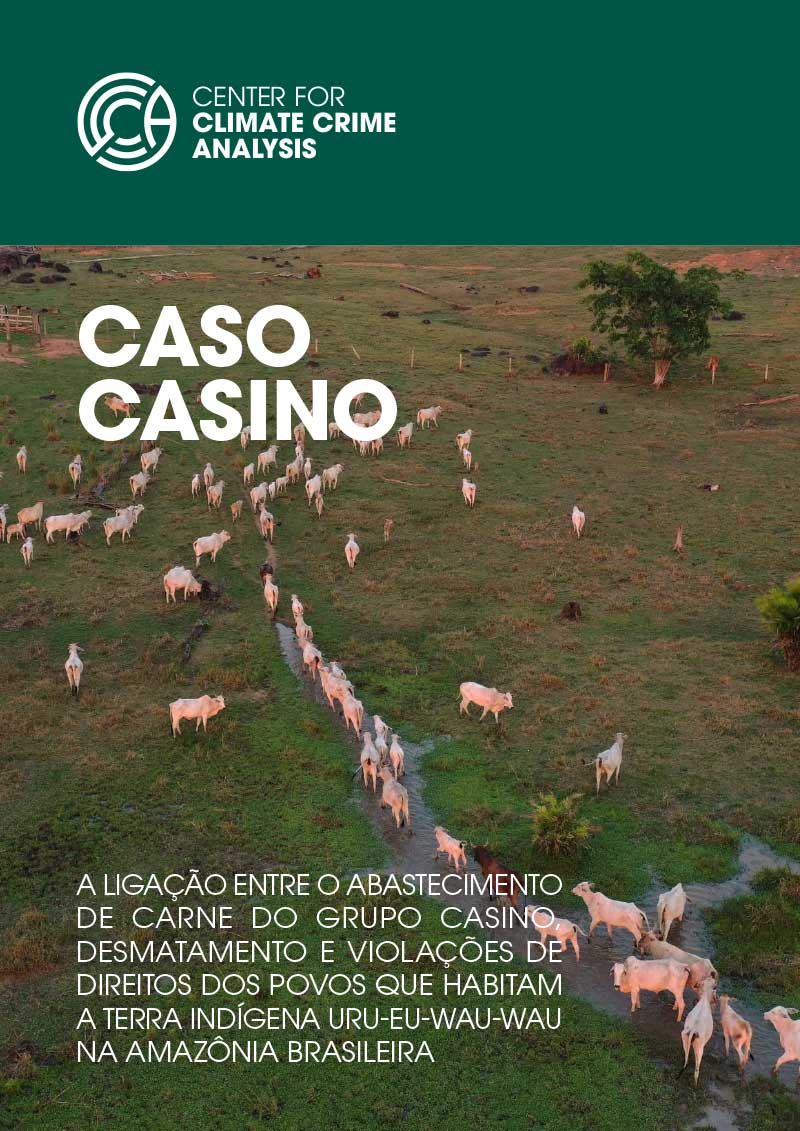 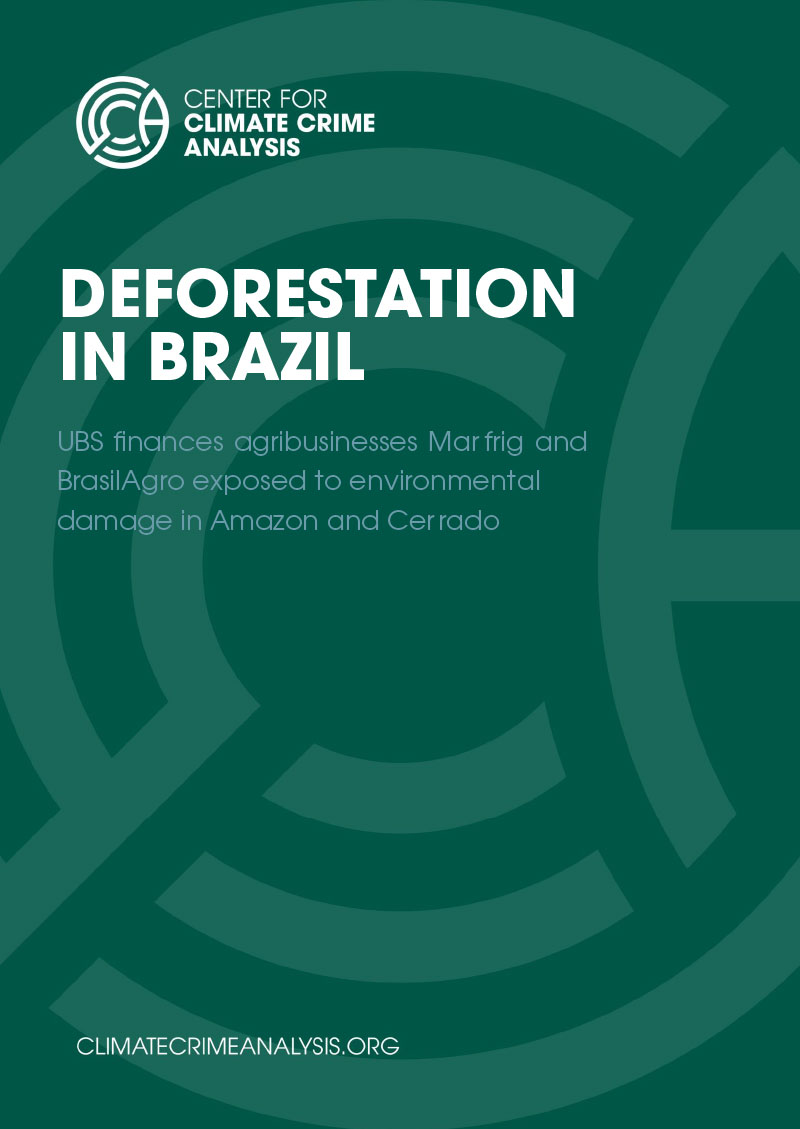 To address illegal deforestation in Brazil, CCCA has built a broad and diverse network of partners, ranging from Brazilian and foreign law enforcement authorities including Europol, local and international NGOs, as well as Brazilian grassroots and indigenous organizations. CCCA works with its partners to inspect the up-stream supply chain of some of Brazil’s major slaughterhouses and assesses whether the cattle processed in those slaughterhouses originates from land that has been illegally deforested, whether the land is under a federal embargo or whether there are other illegalities in their supply chain, such as forced labour or violence against indigenous people. In addition, we examine the financial structures of those slaughterhouses, as well as their trade links both within Brazil and abroad.

As one example of this approach, CCCA has established that the Brazilian slaughterhouse Frigorífico Amazonas has caused illegal deforestation by buying cattle deriving from illegally deforested areas in the State of Amazonas. CCCA provided its information and analysis to the Federal Prosecution Service (“MPF”) of Amazonas. As a result, the MPF brought a public civil action against Frigorífico Amazonas, issuing a fine of over R$43 million (about US$8,22 million). This lawsuit prompted Frigorífico Amazonas to sign a Conduct Adjustment Term Agreement (“TAC Agreement”) with the MPF, which subjects Frigorífico Amazonas to the continuous monitoring by the MPF of the implementation of the “Carne Legal” program. Frigorífico Amazonas also committed not to buy, slaughter, process or trade any cattle deriving from farms that include illegally deforested land or that are mentioned in the Ministry of Labour’s slave labour list or are otherwise infringing the rights of indigenous or other traditional peoples.

In a similar case, CCCA provided evidence to the MPF of Mato Grosso to support the MPF’s civil action against the slaughterhouse Alvorada, including a fine of over R$312 million (US$59 million). CCCA’s evidence and analysis showed that through its supply chain, Alvorada is responsible for 3,591 ha of illegal deforestation in Mato Grosso.

The MPF prosecutor who brought the lawsuit against Frigorífico Amazonas stated that CCCA’s support has been essential for him to take action. According to him, “[t]he MPF has its personnel and structural difficulties. The analyses made by our experts sometimes take years, because there is a backlog, an organization that needs to be followed. […] The analysis made by CCCA was delivered in 40 days. […] [This] is a successful work and an example of a partnership that we hope to continue in the future, perhaps even on a larger scale”. Indeed, having automated and further accelerated its processes, CCCA is currently supporting MPF investigations against nine additional Brazilian slaughterhouses.

In another example, CCCA has provided evidence and analysis to support litigation in France against supermarket giant Casino over deforestation and human rights violations. CCCA established that Casino regularly bought beef from three slaughterhouses owned by JBS, a multinational meatpacker. The slaughterhouses sourced cattle from 592 suppliers responsible for at least 50,000 hectares of deforestation between 2008 and 2020. CCCA further prepared two reports analysing the social damage caused by raising cattle on occupied land, and quantifying the economic impact of the deforestation (see summary reports – in PT). This case significantly impacts on illegal deforestation in Brazil and beyond. This is because Casino is Latin America’s largest food retail company and it is known to be exposed to deforestation risk in its beef supply chain. This is also the first time that a French supermarket chain has been taken to court over deforestation under the French due diligence law, and for indigenous organizations from Brazil and Colombia to request compensation for the damages done to their customary lands and their livelihoods. Some of the evidence generated by CCCA for the Casino case—showing that JBS facilities illegally sourced cattle from the Uru-Eu-Wau-Wau Indigenous territory in the Brazilian state of Rondônia—was also used by Mighty Earth in support of a campaign against Carrefour, another French supermarket chain. As a result of this campaign and the legal risks caused by the Casino case, Carrefour halted its beef supplies from two JBS slaughterhouse linked to deforestation. CCCA will continue to roll out similar cases.

These examples illustrate how corporations driving illegal deforestation can be held accountable for it. They also show that sourcing cattle from illegally deforested land, or financing or otherwise cooperating with companies that are involved in illegal deforestation, involves increasing legal, financial and reputational risks.  Accordingly, any slaughterhouse, their trading partners or financiers should proactively analyse the slaughterhouses’ supply chains. By ensuring that their own supply chains or portfolios do not include any illegal deforestation commodities, those corporations can avoid risks and comply with their due diligence or voluntary sustainability obligations.

Much of the information and data tools upon which CCCA’s analysis relies are either open source or publicly available upon request for access. There is no reason why agricultural, commercial and financial corporations would not be able to access and analyse this same information. And if needed, CCCA stands ready to provide support to those who are genuinely committed to protecting the environment and the climate. 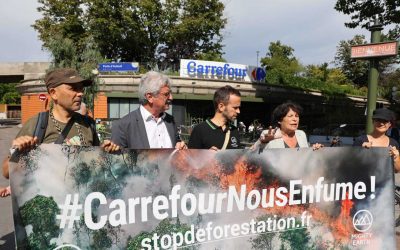 It comes as Mighty Earth launches a new report and campaign on Amazon Day calling on the French retail giant to urgently act to clean up its supply chains and cut ties with industrial meat and soy traders driving deforestation. French supermarket chain Casino is being sued by indigenous groups from the Amazon, for allegedly selling beef linked to deforestation. 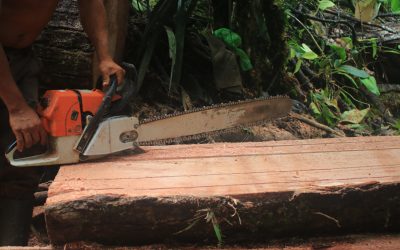 The text, proposed in February by deputy Juarez Costa (MDB-MT), intends to change part of the Forest Code.

Back to What We Do